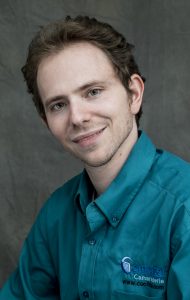 Computer Camaraderie Corp. is a full-service information technology firm based in New York City that specializes in the unique needs of home and small-business users. Its President, Matthew Nadelson, began the company after spending much of his high school and college years providing in-home instruction to individuals with little or no computer experience.

As a young boy, Mr. Nadelson was absolutely fascinated with computers and technology. However, the prohibitively high cost of computers at the time prevented his parents from purchasing him a state-of-the art machine. As a result, he was forced to experiment with older, relatively obsolete equipment, such as the Commodore 64 and IBM AT and XT. It wasn’t until just before junior high school that Mr. Nadelson finally convinced his parents to buy him his dream machine. The knowledge he gathered from his early computer experimentation accelerated his learning of the new PC, and just a short time later he began a most improbable entrance into the technology field.

That entrance occurred during his sophomore year at the esteemed New York City science high school, the Bronx High School of Science. His aunt, a business attorney at the time, noticed his budding computer talents and believed them to be valuable to her legal practice. As a result, Mr. Nadelson began giving her weekly computer lessons on popular software programs such as Microsoft Word, ACT!, and TimeSlips.

She would be the first of many clients to come. Mr. Nadelson quickly earned a reputation as a highly skilled computer teacher who could adapt his teaching style to the ability level of each student, while charging a much lower price than his competitors. As a result, his business spread rapidly via word-of-mouth recommendations. His growing experience and computer knowledge also allowed him to expand his array of services. By the time he graduated high school, he had already designed several websites and served as a consultant for the creator of We Deliver Videos – a local movie rental delivery service. He also was a web designer and consultant for the League of Women Voters of New York City, helping them overcome crucial IT challenges such as the infamous “Y2K” bug. During his sophomore year of college, Matthew Nadelson founded Custom Computer Consulting, aptly named for his vision of providing custom-tailored technology solutions.

As the company grew, it began to to distinguish itself not only for the excellent quality of its services, but also for the reassuring and simple way in which those services were delivered. As a result, it soon outgrew its old name. In July 2006, the company officially became Computer Camaraderie. The new name best represents the company’s spirit of collaboration and commitment to client satisfaction. Today, Computer Camaraderie Corp. is a team of talented people who are dedicated to helping Matthew carry out his vision: to continue to solve his clients’ greatest technology challenges without ever forgetting his humble beginnings.